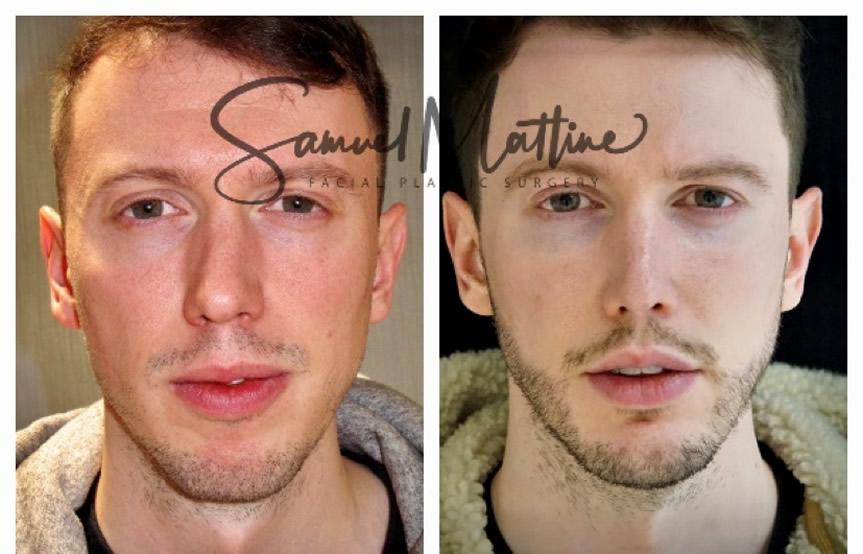 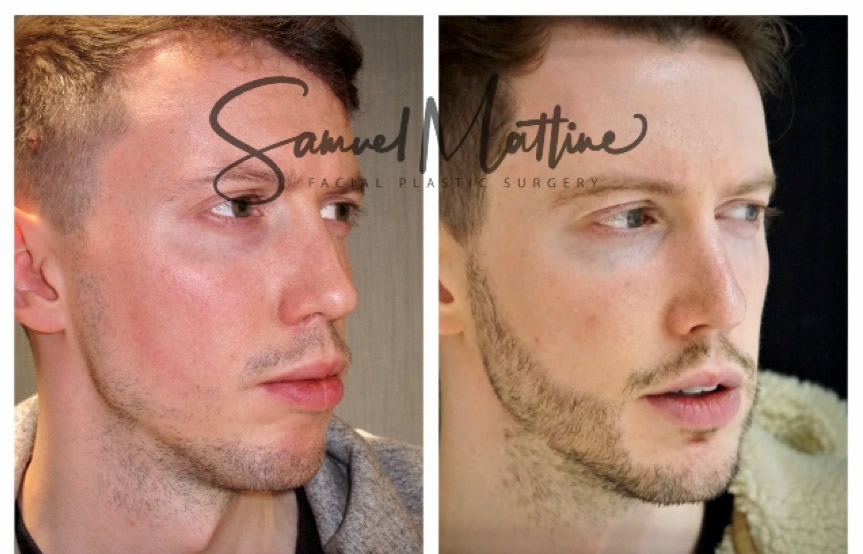 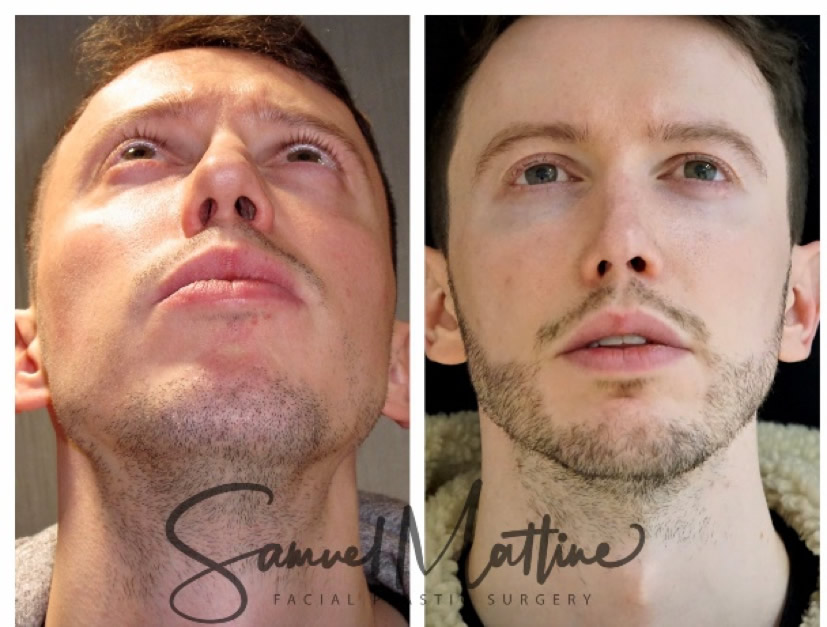 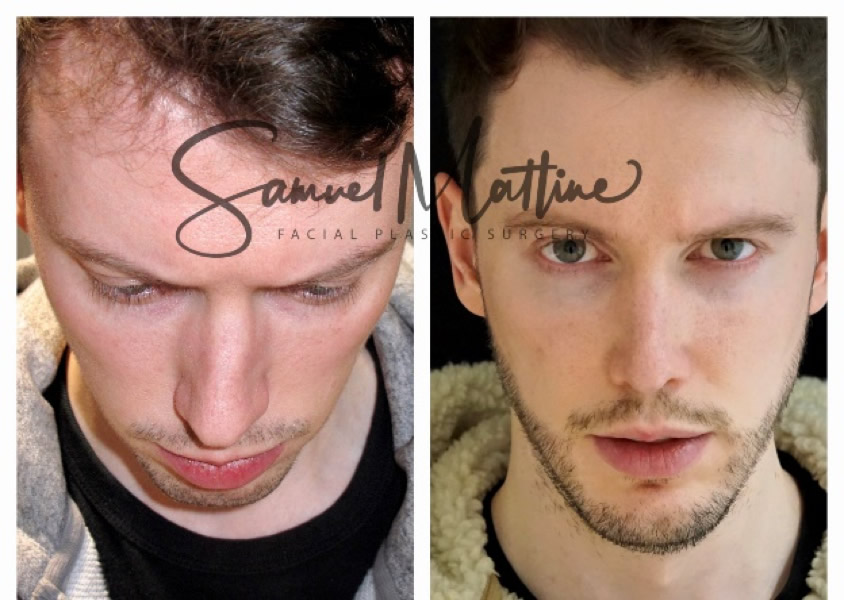 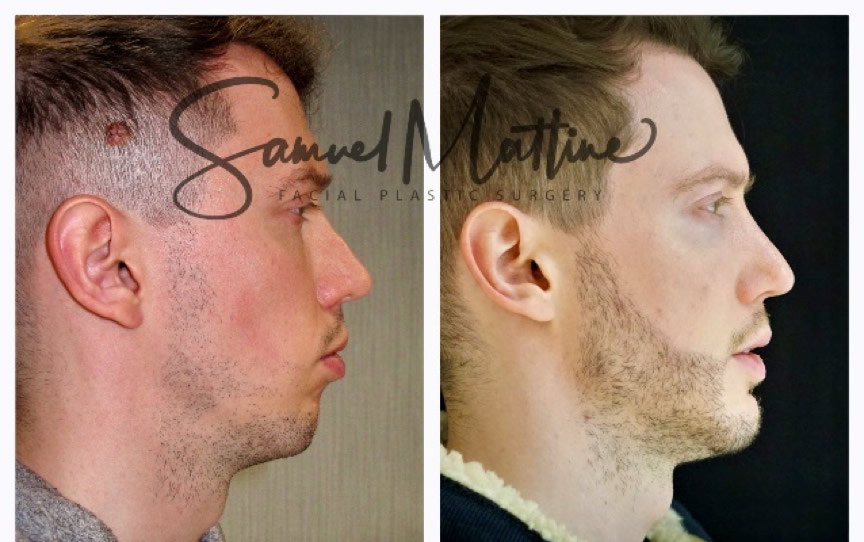 
I first approached Mr Mattine in regards to chin surgery, after doing some extensive internet research myself. I wanted to improve the position of my chin, to make it more prominent and to camouflage my overbite (on my upper teeth). I was confident Mr Mattine was the right surgeon for the job given his experience in this field, and a specialist in head and neck surgery. We discussed the pros and cons of Genioplasty together versus chin implants, and his thoughts coincided with the research I had done online, he also helped me to dispel some irrelevant concerns I had (the downside of trawling through internet forums to research cosmetic procedures). Of course a lot of the literature out there, is from the USA, and as it turns out they do things quite differently in the UK; I wanted to the reassurance of having a procedure done in the UK, to UK standards and by a UK trained and recognised specialist.

We also discussed my concerns with a hump on my nose following a previous unsatisfactory rhinoplasty several years earlier as well as the wish to have a more defined and masculine face.
Mr Mattine suggested other possible options I could address these concerns and enhance my appearance, that I had not considered previously. He was not forceful or pushy with these suggestions at all, they were simply only suggestions – these were a rhinoplasty and cheek implants. He then gave me time to reflect on our discussions; he told me there was no rush and even if I wanted to get everything done, he would not advise doing so in one operation on ethical grounds. He was focused on my well-being and satisfaction above all else, and I trusted that Mr Mattine had my best interests at heart.

After time to reflect, and research, in my case – I decided to get everything done at once (chin, cheeks and nose) as I did not want to have a 2nd operation in the future, if I could avoid it. After all, operations tend to have an emotional impact on family (particularly when under general anaesthesia), we agreed that one operation to cover all the procedures would be do-able. I was insistent on this point, and Mr Mattine after some push-back on ethical grounds then agreed to do all the procedures simultaneously, although he was reluctant at first (the sign of a good surgeon)!

The day of the surgery I was extremely nervous, but Mr Mattine allayed my fears and was there throughout to give me reassurance, including post-operatively. I also had several follow-up appointments to review my progress.

Ultimately, I was extremely happy with the results, when all the swelling finally settled, and I could see the full results 12 months later. It turned out to be a solid decision to have all the procedures done under one operation, as my body would not need to go through the trauma of healing for a second time. I now look in the mirror with far more confidence, than I had before, and it has changed my life in a positive way. I do not regret having the operation, and if I had to have another facial procedure in the future, I would be contacting Mr Mattine and his capable hands to do it.