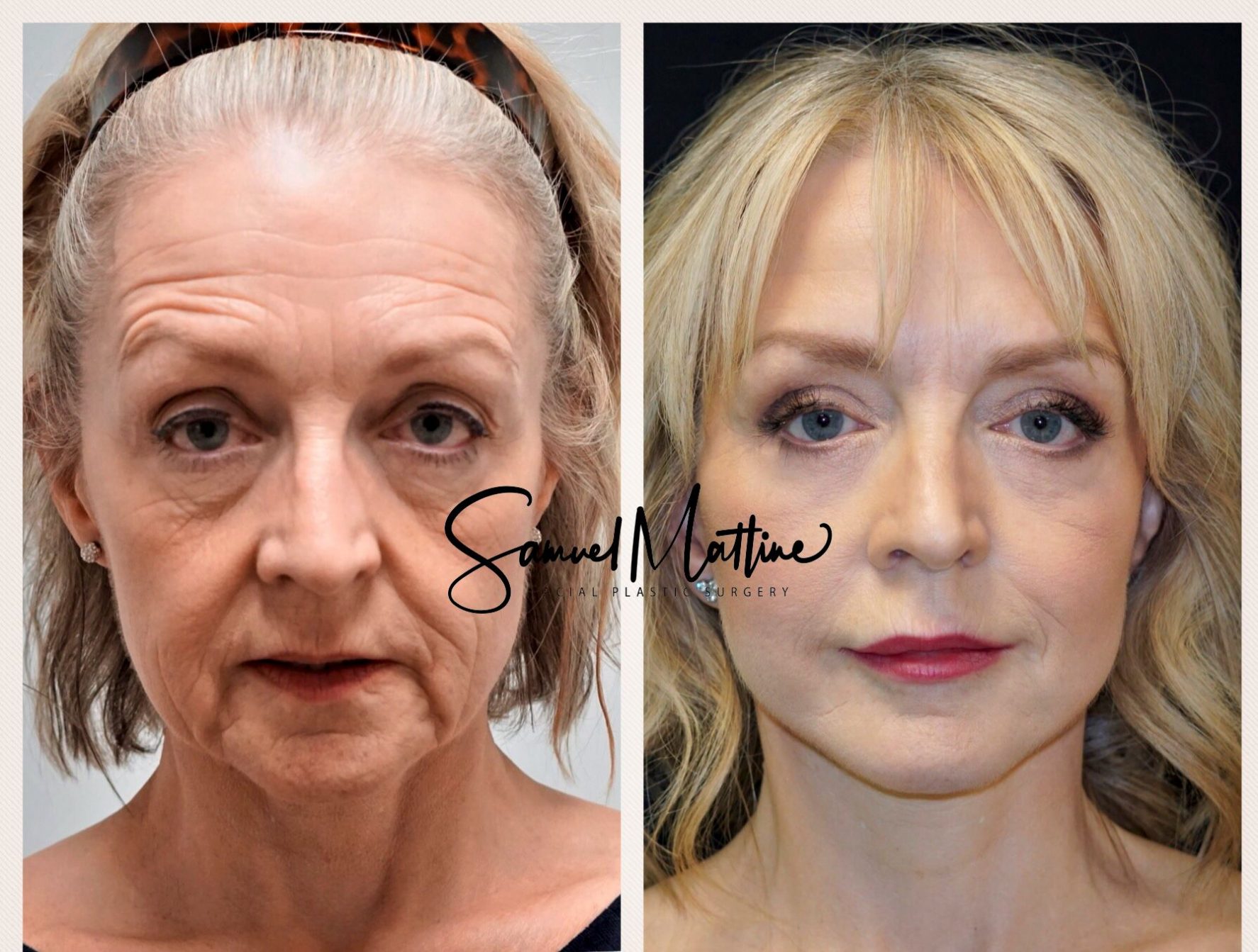 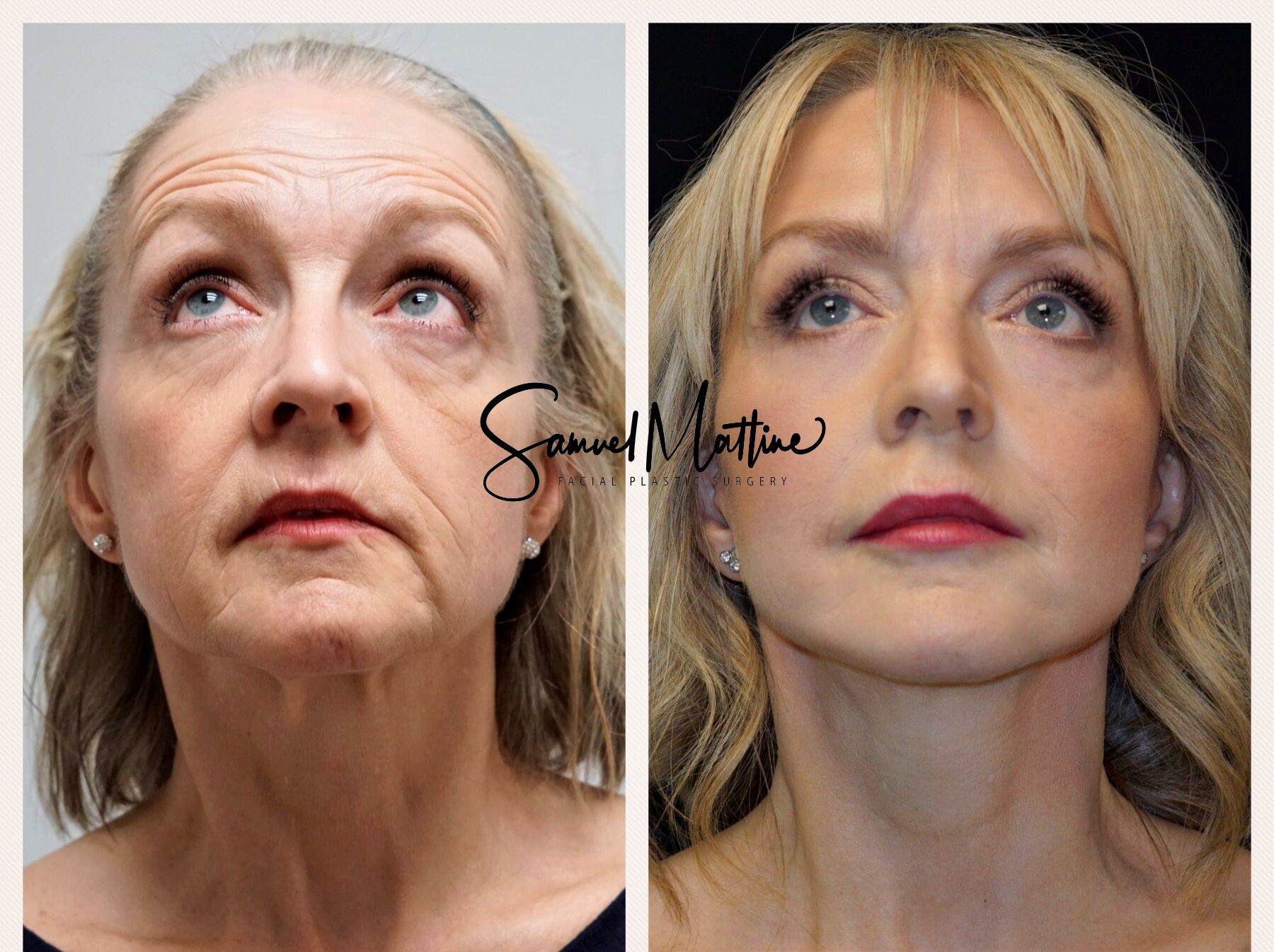 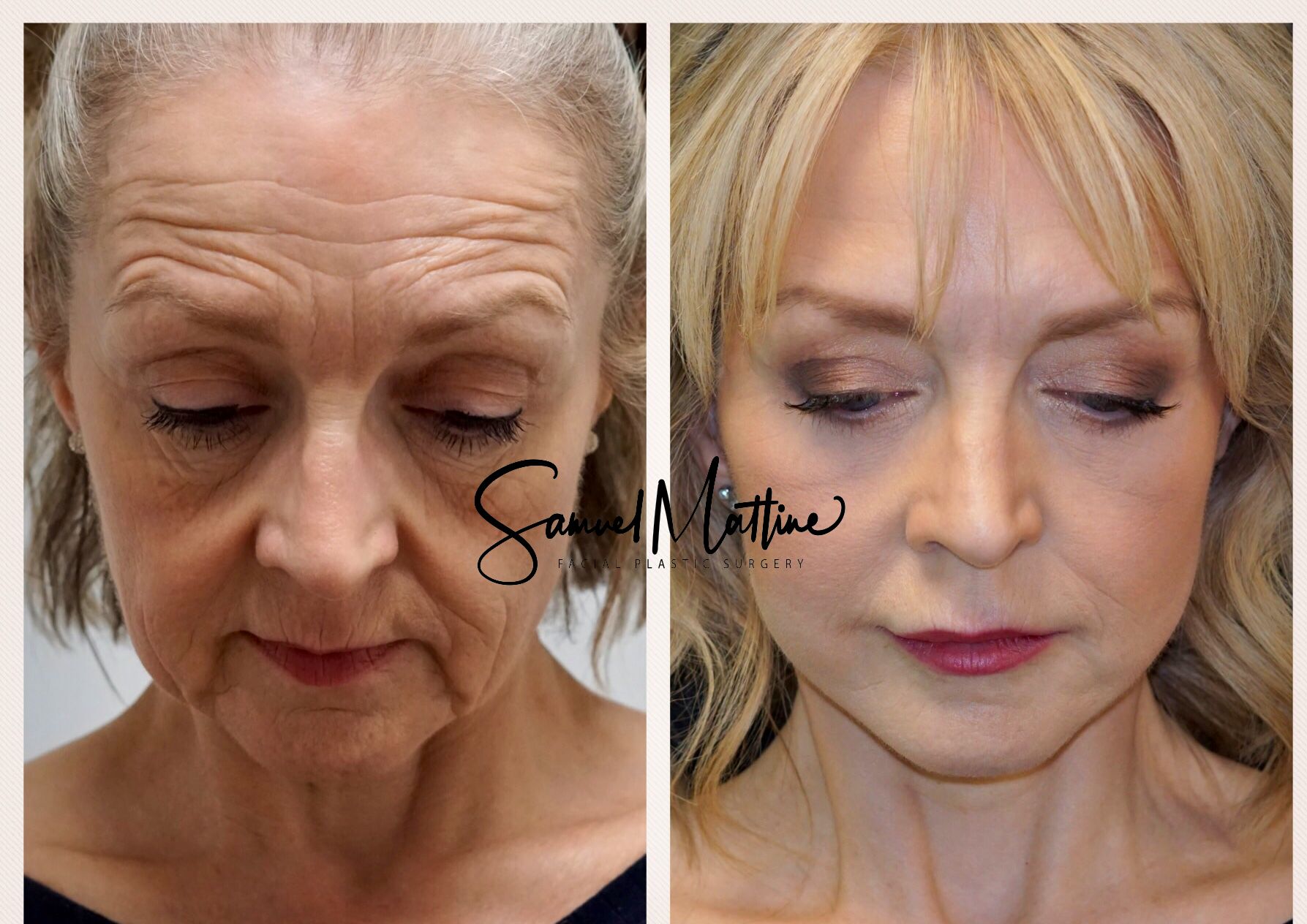 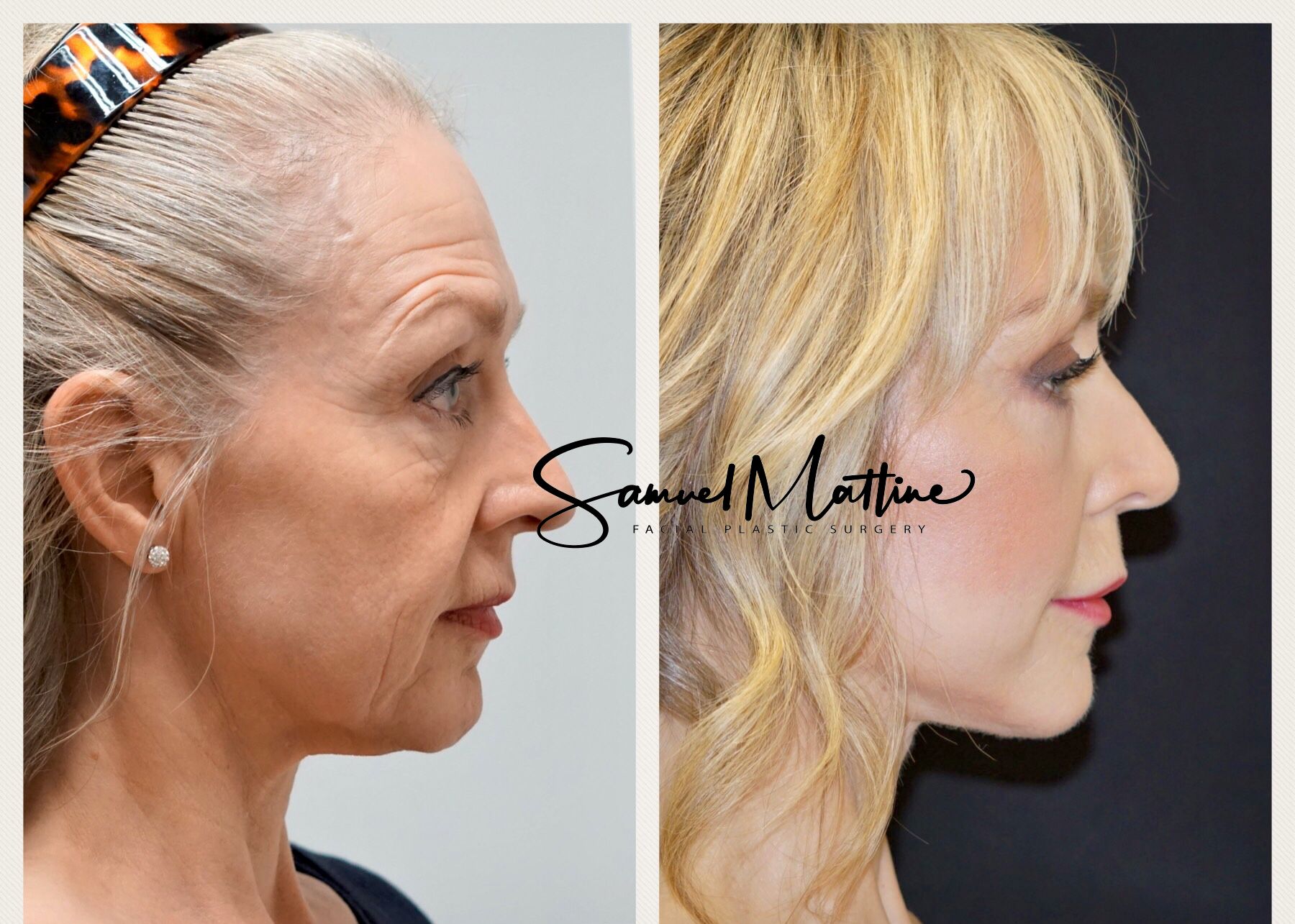 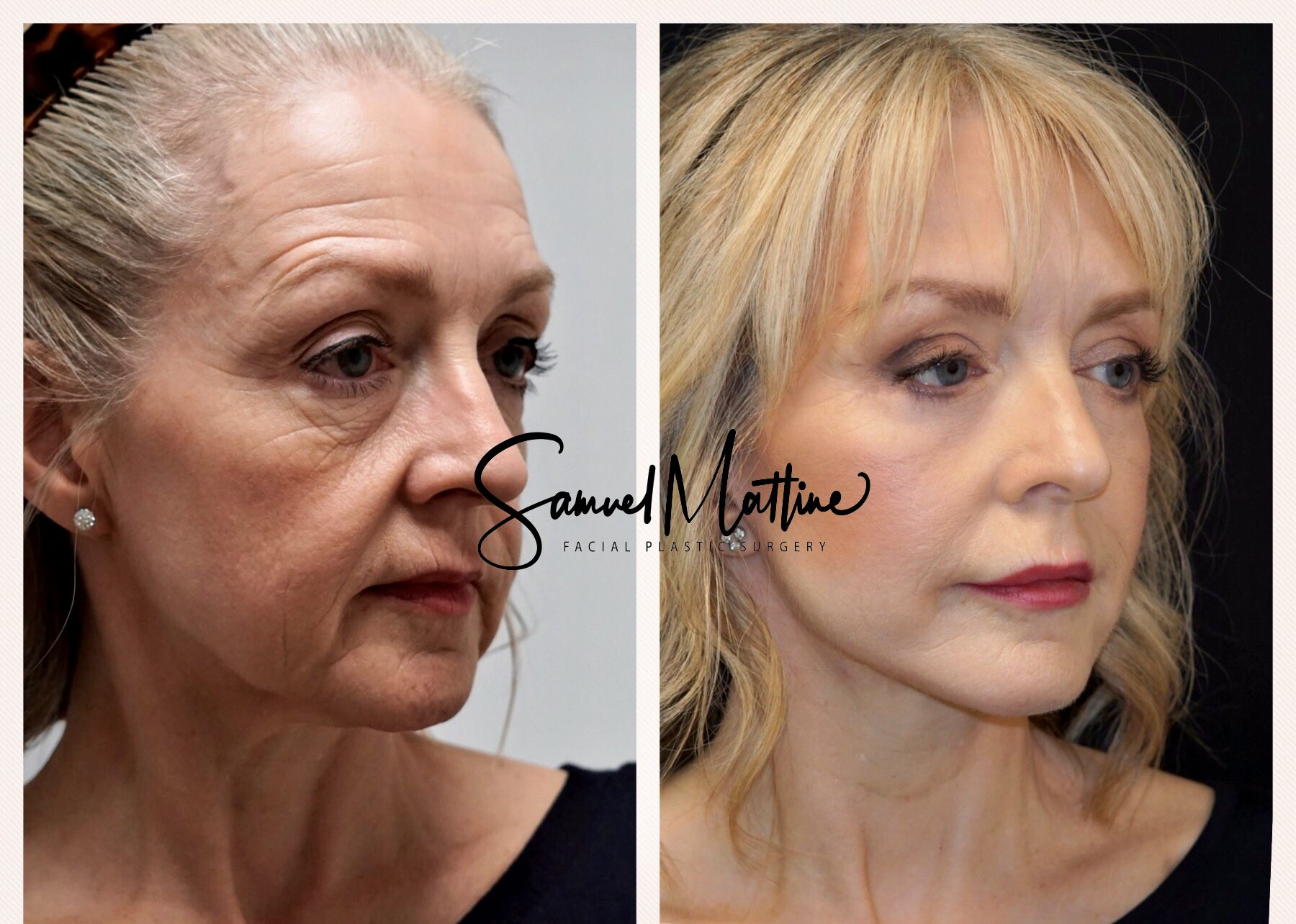 
Louise had decided that she wanted to invest in some facial aesthetic treatment to make her feel more youthful and slow down the signs of ageing. Louise keeps very active, lives a healthy lifestyle and feels like her body is in good physical shape, however her face was giving away her age and no longer reflected how she felt on the inside. The lines and wrinkles on her face reduced her feeling of self-confidence, making her feel increasingly unhappy, so she decided to do something about it, and researched online for a hospital and a specialist consultant who might be able to help.

Louise booked an initial consultation withÂ Mr Samuel Mattine, Facial Plastic SurgeonÂ atÂ BMI The Priory HospitalÂ to discuss the options available to her. To begin with she was considering non-surgical treatments such as BOTOX injections and fillers, however the results of these would only be temporary and not provide the look she wanted to achieve. Mr Mattine spoke to her about surgical options, but Louise wasnât sure she wanted to take the plunge and go through with a full facelift â it seemed too drastic at that time. He explained the process of facial aging to her and after listening to her expectations of outcome, he advised that injectables would not achieve her desired look or meet her expectations and advised her against spending her money on Injectables.

When considering any plastic surgery procedure it is always important the patient is fully informed and considers their decision very carefully. It took Louise eighteen months to think about it and in July 2018 she decided she would like to go ahead and have facial surgery.

âI really valued Mr Mattineâs honest professional opinion because it would have been easy for him just to have gone ahead with the injectables, at best, a temporary solution and upon which I wouldÂ have wasted a great deal of money over time. Nevertheless, it took me quite a while to make up my mind to proceed to surgery. In all that time Mr Mattine was extremely patient and helpful, answering all my questions, addressing my concerns and thoroughly explaining the options to me in terms of the procedure itself and the recovery process.â

âAfter I had the initial lower facial procedures, I realised that the overall effect would be better if I had upper facial surgery to compliment this. All procedures went extremely well. I must admit I was very nervous about them, never previously having had a general anaesthetic or any surgery.Â Â However, Mr Mattine is really reassuring and inspires complete confidence. I never doubted he was the best person to perform this work for me.Â Additionally, the treatment and care I received from all at the hospital was also first rate on both occasionsâ.

Louise had an overnight stay in hospital and had to wear a surgical mask for five days post operation, the sutures were then removed in stages and she returned to work after three weeks.

âI probably could have gone back to work after two weeks but I erred on the side of caution as I didnât really want everyone knowing about the procedure and wanted to appear as normal as possible on my return. Admittedly, there was a little pain and discomfort in the first few days, but this was easily managed with painkillers and by taking things easyâ.

Since having her last procedure in April 2019, Louise now feels her face matches her body. She is thrilled with her results and is happy once again when she looks in the mirror. She now feels much more confident and has loved the reaction from family, friends and work colleagues.

âIt is probably the best investment I have ever made. My face is totally transformed, yet the beauty of Mr Mattineâs work is that the effect is so natural. Obviously, people noticed a difference, but most could not pin it down and just remarked on how well I looked. I am so delighted, and I am moving forward in my life with renewed confidence.Â Â Mr Mattine has been utterly fantastic throughout the process; I cannot thank him enough!â

Mr MattineÂ said:Â Louise came to see me specifically asking for facial fillers and Botox. She was unhappy with excess saggy skin over her face and the neck, poor definition of her jaw and deep creases extending from the nose to the corners of her mouth (nasolabial folds), prominent jowls and marionette lines. She also highlighted the typical hooding of the corner of her eyes and mouth.

After having discussed her concerns and expectations, it was clear fillers and Botox were not the right treatment for her and I advised her against this. She was rather disappointed to leave without having her treatment, but unfortunately too often I see patients who have not been given the right information and offered treatment that is not right for them.

She returned 18 months later asking to explore the surgical options. I realised she was rather anxious having never had surgery previously and hence suggested we offered her surgery in 2 stages. It is not uncommon for patients coming in requesting a long list of several procedures and expecting a total facial makeover, however very often a better outcome can be achieved with doing the surgery in two stages.

What Louise really needed was a face and neck lift. A facelift is the most comprehensive approach to address her concerns and is considered the âgold standardâ for substantive and long-term facial rejuvenation. I do different types of facelift as per the needs of each patients and severity and extent of facial aging. I thought Louise was an ideal candidate for my SIGNATURE FACE AND NECK LIFT and I offered her this in combination with lower lid surgery (Blepharoplasty) for the first stage of her treatment. This specific technique with midface modification can achieve a more substantive, yet natural looking result. There is nothing more disappointing than a facelift that results in an unnatural and windswept look.Â  This technique can also address the aging effect in the midface by repositioning the lost volume and droopy cheek and restore the malar prominence whilst reducing the prominent nasolabial folds and enhance the jawline.

During the second stage of her surgery, I lifted her brows, smoothened her forehead and removed the excess skin of the upper lids. This has had an excellent result in rejuvenating her upper face. She tells me she is over the moon with her result and has literally no visible scars. I consider it a privilege to get to know her and have the opportunity to be involved in her care.Â

I am very pleased to hear her friends had noticed her looking fantastic and rejuvenated and yet unable to say what exactly she had done. In my opinion that is the best outcome.

Read the full story showcased on the BMI Hospitals Website